It's been announced that Yahoo has bought the social blogging site, Tumblr for $1.1 billion. With the acquisition comes reprehension from Tumblr's devout, and vocal, user base. Yahoo's CEO, Marissa Mayer posted the announcement on her own Tumblr blog today, ensuring that Yahoo will "not screw it up". Interestingly enough this was her first post ever on her Tumblr blog. I suppose she decided to wait for the deal to come through. So what could the future hold for Yahoo and Tumblr (...Yumblr)? It's hard to say what will become of the site, but here are some of the good and bad points I see for the two companies.

why it's good for yahoo

Tumblr is one of the fastest growing social media sites with 120,000 singnups per day. The site manages to combine all of the hot online trends: content marketing, visual-heavy content, social/viral sharing, and microblogging. Tumblr also houses an overwhemingly young user base (46.5% are between 18 and 34 years-old). According to Quantcast, 67% of Tumblr users do not have children, meaning more disposable income. This is certainly the perfect audience for advertising efforts. Yahoo's credibility could increase if this proves to be a smart buyout.

why it's bad for yahoo

Some people believe that the company overpaid for the buyout. Considering the major pushback from Tumblr users to add any form of advertising, this could be true. It will be difficult to generate revenue without ads, but quick changes to the site could turn users off and have them looking elsewhere online. Strategy will definitely have to be used carefully when considering how to monetize the site. Also, it's risky to invest in social sites; remember when NewsCorp bought out Myspace in 2005?

why it's good for tumblr

Working with a large company like Yahoo means there are more opportunities to improve the site's speed and functionality. Not that Tumblr isn't already growing at a fast rate, but Yahoo's buyout helps the site reach an even wider audience. Everyone working at Tumblr gets to keep their job, and title, as the company will be independently operated. Mayer stated in a press conference, "The product, service and brand will continue to be defined and developed separately". This ideal makes it look like a win-win investment.

why it's bad for tumblr

While Tumblr's main age demographic is between 18 and 34, Yahoo skews more toward an older audience. It may be difficult for Tumblr bloggers to identify and trust with the Yahoo brand. Despite Mayer's promise not to "screw up" Tumblr, in the end, Yahoo holds the purse strings and I'm assuming the final word will be theirs. Are they capable of relating enough to the Tumblr audience to make the right decisions and not come off as "the stepmother" company?

Another major boundary to cross will be copyright issues. How will Yahoo be able to handle Tumblr's lenient policy on sharing content? Will there be legal issues to address? And if so, this may take away the easy and fun nature of Tumblr blogging. 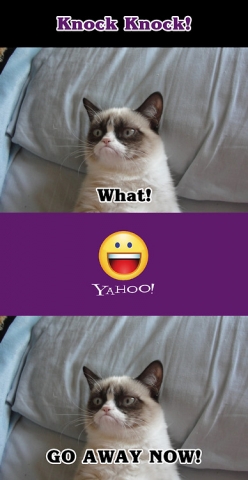 What are your thoughts on the buyout? Which company do you think benefited most? Let us know in the comments below!

12 Interesting and Business-Leveraging Facts About Tumblr

Election Time is Here and Yahoo! Wants Your Opinion

10 Tips for Better E-Mail Marketing
3 Ways to Optimize Your Website to Rank for Multiple Locations
How To Use Canva To Promote Events on Social Media
Amazing Tools for Writing & Blogging
Are You Ready for ADA Compliance 2018?
Managing your DrupalVM Environment: Vagrant Plugins and SED Scripts