I was going to write a post about some cool fitness gadgets that I'm totally excited for, you know like Nike's Fuel Band or Jawbone's UP. But while I was investigating these awesome fitness tracking devices, I realized that a lot of them don't support Android, so I've had to hold off on buying any of them. 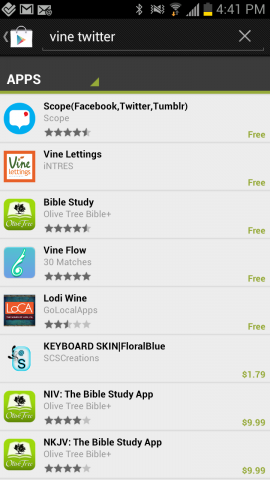 Even though Jawbone has said they are working on developing an app for the Android, there's no indication that a launch date is set for the near future.

It's not just fitness devices that lack Android compatability, Twitter's new social video sharing app, Vine, is only available for IOS. And with the majority of Android users being 18-34, don't you think there would be an interest in a social video app?

I knew when I switched to an Android from an iPhone that I would experience remorse in some regards, not to mention scorn from avid Apple users.

And it's true that Apple recently became the top mobile-phone vendor (32% market share), bumping Samsung down to number 2 on the charts, but is this any reason to completely disregard Android users?

I don't want this post to turn into a, 'Why not me?' soap box, or an 'I hate Apple' rant (which I totally don't, btw), but I really wish that businesses would take off their iPhone blinders and start showing some love to Android users too. Because unless the iPhone achieves world domination and becomes the only mobile phone available, it might be worthwhile to consider developing for other devices too, it could gain you sales.

Do you think more businesses should include Android in their app development?

Apps for the Busy Marketer

Breaking up the Monolithic Drupal Site with a Subdomain Multisite