Everything You Need to Know About New and Current Google Penalties

In a web world where content is king, SEO is the second-in-command. Your site’s Google rankings seriously affect the amount of traffic you receive as a result of an organic search. Fortunately, this has led marketing specialists to pay special attention to the algorithms that Google uses to determine who sits at the top of the search page.

When these penalties are released, many sites see drops in traffic or rankings. The Google Webmasters Forum offers suggestions on ways to alter your content to follow best practices, and if your rankings or traffic have dropped due to a Google penalty in the past, you can fix the site and submit a Reconsideration Request to have the penalty removed.

A Brief Background of Google Penalties1

In September of 2015, Google announced that they would begin penalizing sites that use intrusive app install ads that block large amounts of content. This update is expected to take effect on November 1, 2015, and will likely act as a supplement to the Mobile-Friendly update of April 2015 by deeming sites with these ads as not mobile-friendly.3 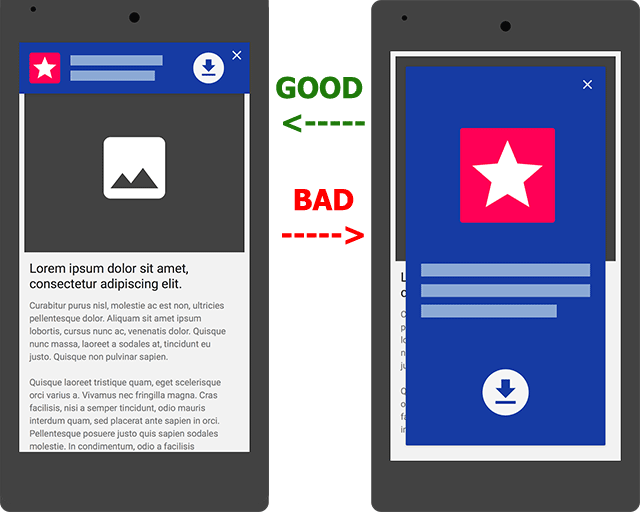 Google actually warned developers and content creators about this bad practice in July, leading some bloggers to predict this change in the algorithm for mobile pages. If you’re following this practice, you have about a month to update your site or face potentially lowered organic rankings.

Do you think large app install ads are intrusive, or is this an excessive penalty by Google? Leave your comments below.

About the Author
An avid conversationalist, Kendall is excited to take her love for client relations & marketing and design to LevelTen Interactive. She has a passion for inbound sales, understanding and anticipating client needs, and great attention to detail. END_OF_DOCUMENT_TOKEN_TO_BE_REPLACED

Google Analytics and Google Spreadsheets: Create Your Own Dashboard

Here's Why You Shouldn't Care About Any Search Engine but Google

8 Important Stats About Email and Marketing Automation
How to Write Content for Local Landing Pages: A Beginner's Guide
We Have Started the Journey of the Results Oriented Web Roadshow
10 Fundamentals of Great UX
Join The LevelTen Interactive Team!
Using DrupalVM for Drupal Development