A little over a year of following my own advice, I decided to re-visit the long overdue topic of responsive theming and share several valuable techniques and processes I've learned along the way.

The most important part of any toolkit is probably going to be the theme framework you'll use. Omega, hands down, claimed this crown for me in 2012. Packed with an amazing amount of flexibility and features, there wasn’t much I couldn't do with it. Towards the end of the year, however, I found myself feeling like I was fighting it more than working with it. Granted, this issue probably stemmed from my “need-something-new” itch. Alas, I gave in and decided to really dig and see what other frameworks existed... and not just in Drupal either.

To Google, I did go. Searching for "responsive frameworks", I came across this kick-ass article by Ben Gremillion from Treehouse Blog: A Look at Responsive CSS Frameworks. He gives a pretty darn good breakdown of the pros and cons on many of them.

Tickle me spring green and call me mobile, [Twitter] Bootstrap claimed the 2013 framework crown! So it wasn’t really that dramatic of a decision, but here are a few of the many reasons I decided to go this route:

This is probably the next important tool in your responsive arsenal. No, it’s not actually necessary to get the job done, but by golly it certainly speeds up the process! Now any preprocessor will do and you can generally find a GUI or CLI program for any operating system.

For those of you who use Macs though, have I got an app for you! CodeKit — THE Mac App For Web Developers. It is, by far, the best program I have bought in a LONG time! Not only does it preprocess LESS automatically, but also Sass/Scss (with even Compass and Bourbon built-in), Stylus, JavaScript, CoffeeScript, Haml, Jade, and Slim. Oh and the frequent updates are nice too!

I found this useful technique that guided me down the road to creating my own that I use quite frequently through out my projects. This allows for a much easier implementation for responsive design. It also allows me to keep styling together and keeps the code pretty clean. No more additional files, no more separate definitions, it just works!

Many of you are probably already familiar with Display Suite. Until this module came along though, implementing consistent styling through out a Drupal site presented its challenges. Often times, more than not, areas of the site (like node templates or views) had to be constructued to "match" the theme. Because of this, I think it's relatively easy for us to be stuck in the mindset that we should be letting these other modules handle our structuring (and even sometimes styling) of entities or other data.

So I tried a little experiment. No node templates, no fields in views, just render the entity with a desired layout. To my complete and delightful assumption, Display Suite worked like a charm! Let's take it a step further, create custom layouts for the content types. These, of course, should probably be based off the theme and should be predetermined before you actually start theming or building your site.

Now, you could use the existing classes that come standard with rendering an entity (which include the layout name), but I prefer to create my own region classes in Display Suite. It allows for a cleaner approach in the CSS so I don't have to target multiple classes. Either way, matching an entity's layout classes with your themes CSS is where the power and magic really starts to happen.

Take our site here, this blog you're reading. We have six different layouts for this content type. We use these different layouts through the site and each have their own unique theme stylings. For each style, I created a custom layout with a matching CSS selector. In this example, I will use our Article Teaser layout:

In the Display Suite classes admin area (left image), I added [code]style-article-teaser|Artical Teaser[/code] where the text on the left of the pipe is the class name and the text on the right is the human readable label. Once my classes were setup, I headed over to the content's "Manage display" configuration form (top right image). From there, I chose my "Article Teaser" layout and scrolled to the bottom where I selected the "Custom classes" tab (bottom right image) and chose the appropriate class region for my entire layout. 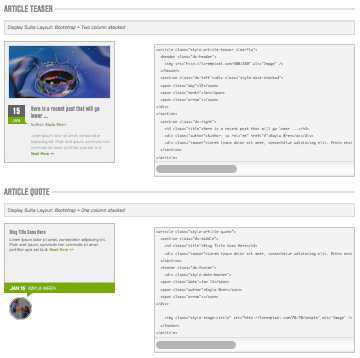 You may wonder, "What does this have to do with responsive?" Actually proably more than you might think. Whenever I start a new project, I like to create an internal style guide that shows the rendered element and the required markup (complete with internal classes). I do this for three reasons:

Ta-ta-ta-da! Fewer one-off styles or pages that aren't responsive. It just works! Granted, you'll still have a few pages that you might need to tweak, but you're going to be far better off with only a few and not all!

Overall, responsive theming can be a daunting task, to say the least. But if you're willing to get a groove goin', things can speed up pretty nicely. Hopefully some of these techniques and processes I've discovered will help aid you in your troubles. Also, feel free to let me in on some of yours down below in the comments!

Drupal Theming - A Basic Primer on Template.php and Template Files

Why It’s Time to Go Responsive

The Mobile vs. Responsive Show Down