One of the most inspirational books I have read over the last decade is The Fifth Discipline by Peter Senge. Senge espouses that in the long run the only sustainable competitive advantage an organization can create is the ability to learn faster than the competition. The book’s focus is around a single critical component for maximizing learning and innovation, systems thinking.

Ever since reading that book I have looked for opportunities to integrate systems thinking into web development. Websites are ideal for such an approach that is about solving complex problems by understanding how components in a system interact and affect the outcome in a holistic way.

As an engineer, I find it rather odd the typical way website strategies are developed. Strategic planning is derived from the needs and knowledge of a few stakeholders. There is nothing wrong with planning around heuristics, it is fast and efficient. But it is only half of the process.

The standard operating procedure is like a scientist creating a hypothesis, developing an experiment then never gathering or analyzing the data to validate the hypothesis. (We all learned the proper way to do this in elementary school. That was the whole point of the science fair.)

The lack of systems thinking in web development is not just a problem of vision. It is also a problem of tools. You need a set of tools capable of quantifying all desired outputs of a website. It needs to be able to relate the effect (output) to any number of causes (input). Data has to be made transparent across the entire team to raise the collective intelligence of all decisions and create a shared vision. Finally it needs to be simple, so it actually gets used.

WHAT IS THE INTELLIGENCE SYSTEM?

Over the last few months we have been working on a framework for addressing these challenges using Drupal. The project started out as just a port of the dashboard from the SEO Tools module which integrated a set of tailored Google Analytics reports into Drupal.

I wanted the Drupal 7 version to be less SEO specific and more about content and engagement. As I dug into what was possible with Google Analytics, the project morphed into something else.

Monday the Intelligence system went into beta. Now the biggest challenge is explaining what it is and what it is really designed to do. 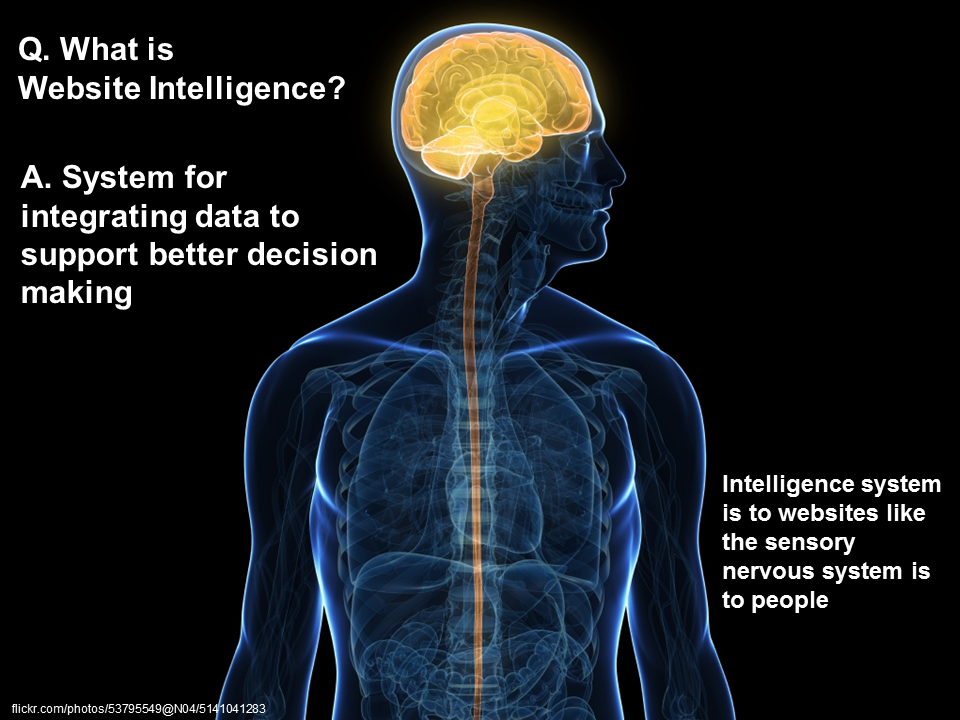 It’s maybe best described by its goal: A system for integrating data to support better decision-making (although that is rather high level).

Or maybe as a metaphor:  The Intelligence system is to websites what the sensory nervous system is to humans.

Or maybe even as my brother put it as I explained it over a few cervezas: “oh it’s like Google Analytics on steroids.” Well, he got part of it.

To extend the metaphor a bit; we can think of the websites we build today like making a person with only half of their nervous system. There is motor control but no senses. The brain (the decision makers) tells the body (the website) what to do, but without eyes, ears and other sensory feedback there is no way to know if it is really doing what we ultimately want. We might tell the mouth to say the most amazing things, but without the eyes we may be just talking to a blank wall or even a crowd of people who aren’t really listening.

What problem(s) are we trying to solve?

Maybe more insightful is to describe the problem, or more accurately the problems, we are trying to solve. The challenge is the list is actually quite long and keeps growing: 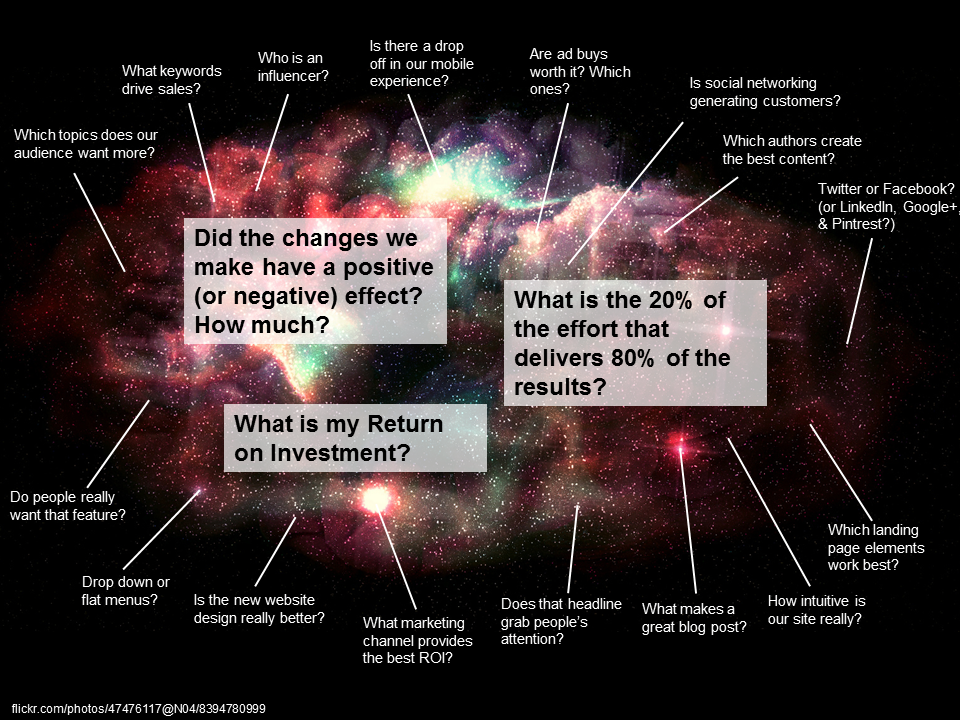 In reality there are three central problems this system is designed to help us solve.

Are we really getting better?

Leading websites are constantly being improved. New ideas are implemented based on new knowledge. By measuring the outcomes, these mental models are either validated or corrected before too much damage is done. In either case, understanding is gained leading to better and more effect decision making in the future.

How do we achieve more with less?

One of my favorite management quotes is “We know we are getting 80% of the results from 20% of the effort. The problem is we don’t know which 20%”. Productive websites require a lot of inputs; content, marketing campaigns, visitors, engagement, etc. Each adds to the output, but not all equally. A core goal of the Intelligence system is to help teams maximize efficiency by identifying and focusing on only what provides the most value.

What is my return on investment?

Nearly as shocking as the lack of systems thinking in web development is the lack of capital budgeting principles. Innovation must be funded. Yet most organizations treat web initiatives as a cost center rather than a profit center. Once again there is a lack of tools to quantify returns in a holistic way. Thus what is hard to measure is not. Intelligence can help organizations determine the real value their web efforts are generating.

When people first see the system the typical response is "Oh, look at the pretty reports.” OK, the reports are cool, but that is not really the point.

The goal is to help people understand the systems within systems that make up a website and how they interact to affect outcomes. To provide insight that facilitates team learning and more efficient innovation. To help people build websites with more intelligence.

Currently we are working on documenting the system. Most of the docs will be standard how to tutorials. I already have a few out (see the project page). But I realized while writing the next tutorial on scoring, I need to provide some bigger picture background what we are trying to achieve. So I am diverging from the more hand-on tutorials to do a few posts about applying systems thinking to websites.

About the Author
Tom, the CEO and founder of LevelTen, has successfully consulted on over 100 interactive projects over the past 17 years. He has a blended background of expertise in both marketing and technology development, which he uses to help clients develop high ROI interactive media and marketing through... END_OF_DOCUMENT_TOKEN_TO_BE_REPLACED

How to Install the Intelligence Module

Analytics Dashboards: OE Intelligence vs Klipfolio from a Nontechnical Marketer