This week in the world of web, you can immerse yourself in virtual reality with Samsung’s new goggles, and it might not cost a fortune.  Blackberry is teaming up with Android and bringing back the slider phone, but will Blackberry make a real comeback?  You can DrawAttention to your message by turning your laptop into a whiteboard or blackboard.  A farewell to Firefox’s unique add-ons, as it opens the door to Chrome and Opera extensions.  Also, we scratch the surface of the Dark Web, thanks to Ashley Madison.  And you do not have to feel embarrassed about chatting with your partners-in-poo because you might help fund clean water and hygiene in developing countries.

Samsung presented Gear VR Innovator Edition headsets this week, one of the first virtual reality devices targeted beyond video gamers .  To use the Gear VR, you clip-in a Samsung Galaxy S6, S6 Edge, or Note 4.  (Future plans do include compatibility with other phones.)  The phone serves as the screen, which is then manipulated by the goggles to create a 96-degree field of vision, slightly wider than your natural peripheral vision.  With the screen just an inch from your eyes, it looks mega-sized, and you are fully immersed in the 3D virtual reality experience.  It is controlled by a touchpad, volume control, and ‘back’ button on the right side of the device, and there is also a USB port for accessories or simultaneous charging.  The Gear VR is powered with software by Oculus, a leader in virtual reality development.  360 Videos, 360 Photos, games, and other apps can be downloaded via the Oculus Store.  Some favorites include seeing a show with ‘Cirque du Soleil’s Zarkana,’ touring the solar system with ‘Titans of Space,’ and nosing around the studio of a songwriter with ‘Strangers with Patrick Wilson.’  With ad actual wearable device, movement sensors, and a  trackpad , theGear VR is a big step-up from Google Cardboard, but still very affordably priced at $200 (if you already have or want a compatible Samsung phone).  There are grumbles that there is not enough content available, but the content library is expanding.  As an early edition and sign of technology to come, this sounds virtually amazing.

The return on the Blackberry?

This week, leaked images provided a sneak peek of the features of the Blackberry Venice, due for release in November 2015.  The biggest change is that at least one version will likely be running on Android OS and allow access to the Google Play Store.  It includes both a full touch screen and a slide-out keyboard, solving the annoyance of half the touch screen being obstructed by an on-screen keyboard.  The images also revealed the Blackberry Hub feature, where all your emails, text messages, tweets, and other social media messages can be managed in one place.  The slider phone will be available on Sprint, AT&T, T-Mobile, and Verizon networks.  Little else is known about the specifications, and Blackberry is not commenting. 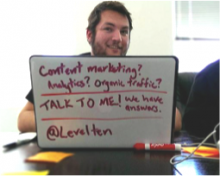 Here is a clever innovation perfect for every coffee shop telecommuter and creative marketing enthusiast.  It is an adhesive vinyl blackboard or whiteboard panel that fits on the back side of your laptop screen, where you can scribble your message for everyone around you.  Do you want your fellow coffee sippers to check out your blog?  Are you selling chunks of aromatic wax?  Do you want to give people free advice?  Let them know about the upcoming 5K that your company is sponsoring?  Remind people to recycle and love one another?  Endless possibilities really, and you can erase it and write something new tomorrow.  It’s only $11 to $17, depending on size.  Also, this ingenuity was created by LevelTen web developer Kyle Taylor, and recently featured on Product Hunt and CNET News this week.

Mozilla is making good on its promise to improve and stabilize their Firefox browser.  They are changing the way it handles add-ons, making them simpler and more compatible with Chrome, Opera, and Microsoft Edge browsers.  By adopting the Blink-compatible API ‘WebExtensions,’ it will make add-ons more universal across browsers.  Starting with Firefox 41, all extensions will be reviewed and digitally signed by Mozilla, and current add-ons that have not been digitally signed prior to the release of Firefox 42 will be disabled.  They are also implementing ‘Electrolysis’ to make one process per browser tab, so that when you encounter an error, it does not crash all of the open tabs within the browser.  This will be enabled in Firefox 43, and may destabilize some add-ons.  Developers are being encouraged to test and modify their add-ons.  Mozilla devotees are worried that mainstreaming the API and allowing Chrome and other extensions into Firefox will diminish the customization and functionalities that make Firefox unique, but it will make writing extensions much simpler for developers.

Have you been to the Darkside?

Hackers brought the “dark web” into the spotlight this week, when they outed Josh Duggar, many government employees, and countless others who had accounts with Ashley Madison, a dating site for people seeking extramarital affairs.  The hackers published the client lists in .txt files via a Tor server and seem to have left no cyber trail for law enforcement or other interested parties to discover who did this.  Many mainstream internet users are unfamiliar with the layers of the Internet:

Activities on the dark web include drug dealing, child pornography, assassins-for-hire, and gun sales.  The infamous Silk Road site was part of the dark web, and ISIS is known to utilize it as well.  But it has other uses that are secretive but not criminal, such as allowing informants to communicate with law enforcement without being tracked, or simply performing a secret search that you don’t want tracked and stored by Google or your computer.

Let’s end this on a lighter note and talk about pooductivity.

Do you take your phone to the toilet with you?  And do you get a little bored and lonely in there?  Of course, there is an app for that. Pooductive is a group messaging app that connects people who want company while they are “dropping off their kids at the pool.”  You can connect globally, or set a local from 5 to 250 km.  You do not have to talk about what is going on at that moment, although some doo.  Others talk about life philosophies or the weather.  Users also have the option of posting a relevant song title, such as “Life in the Fastlane.”  The creators gave up on a Kickstarter campaign after raising only about $200.  Yet after releasing it for free on iOS just this week, they already have over 20,000 users, and they hope to eventually connect profits from the app with a charity that promotes clean water and hygiene in developing countries.

Have any other interesting tech news we might have missed? Let us know in the comments below.

About the Author
Felipa Villegas is the Marketing Coordinator at LevelTen Interactive. A writer by trade, Felipa loves to make the written word work by delivering high quality, engaging content to audiences. She leads the LevelTen marketing team in executing demand generation, SEO, Analytic Data Mining and Copy... END_OF_DOCUMENT_TOKEN_TO_BE_REPLACED